That burning sensation when you..

No, not when you pee.. if this looks like you this morning, go get checked.. 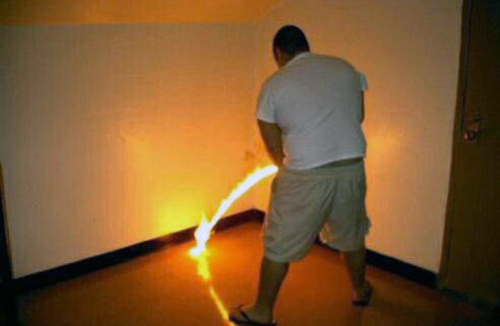 This is not me. I know how to wear a properly fitted shirt and use a belt.

Burning sensations are usually caused by fire, and fire is hot.. but what is fire exactly? The simple answer is “the combustion of organic material”, but that’s boring and doesn’t really make for an interesting blog post, now does it..

Visible fire is the result of energy being expelled when combustible carbons are gaining or losing electrons. Some are positive, some are negative, and to prove the idea that fire is energy, you can do an experiment in your kitchen at home. Get a magnet, one of the U shaped magnets works best, and a candle. Mount the magnet with a non-metal mount, and place it in such a way that the tip of the flame just barely passes past the line where the positive and negative poles of the magnet are. Whether the magnet is horizontal or vertical doesn’t matter, so long as the flame is lined up correctly. Now blow out the candle, and watch the smoke. If you’ve done it correctly, you should see one of the following:

In some cases, you may see the flame act differently too, depending on the power of the magnet itself. Rare earth magnets for instance are much stronger, and can over power the force that gravity has on the flame, causing it to act weird. Electromagnets can cause the flame to expand out in a flat, slightly bulging circle shape, not the “snake tongue” like shape we’re used to seeing. In a zero gravity environment, fire acts like what a soap bubble does, only it expands outwards in a constant motion, eventually extinguishing itself as the fuel runs out, instead of being a stationary size.
What does this have to do with Astronomy?

Why do you think the Sun and other stars are round?