I write a lot about science and physics, and tend to always take the Mythbuster’s approach on things – finding the biggest explosion, the fastest thing, or the coldest thing (coming soon!) – and today is no different.Today we get to look at the shiniest living thing on the planet: The berries of the Pollia Condensata plant!

Pretty ain’t it?
Second place is held currently by the Blue Morpho Butterfly wing, either one it doesn’t matter, and third place is held by a scarab beetle’s carapace (for non Coleoptera, essentially it’s back). The berries were discovered when a scientist named Ulrich Steiner found the berry unimpressive and small. His quip about it being smaller than a blueberry is laughable as he was quoted “what good could ever come out of something smaller than a blueberry?” (*grumble*atoms*grumble*). Upon further inspection, Steiner noticed that it was extremely bright, luminous and intense. He acquired a few berries and further studied them, and in other labs around the world, reflectivity of the berries showed that ~30% of the light is reflected back, but not at a perfect angle as expected. The light almost acted as if it was hitting a prism and split, but the white light wasn’t being split. It hit something inside, then sent off multiple paths of light in the reflected light. Think of it like one beam going in, and 3 beams coming out the other side. Upon study of the cellular structure of the berry, it is now known that the way the structure is laid out, allows light to be thrown around and sent out at perfect, yet awkward angles relative to the entry angle.

The cells are coiled, for lack of a better explanation. The cylinder shaped cells are laid out parallel to each other, but each cell is slightly more rotated then the partner beside it. Grab two water bottles, and place them on their side, with the labels aligned and facing up. Now turn one bottle so that the label is facing slightly to the right or left. That’s what the cells are doing, and it’s this effect that causes the beams of light to be sent out slightly different than the cell beside it. To our eyes, it appears brighter, as more light is entering our eyes. 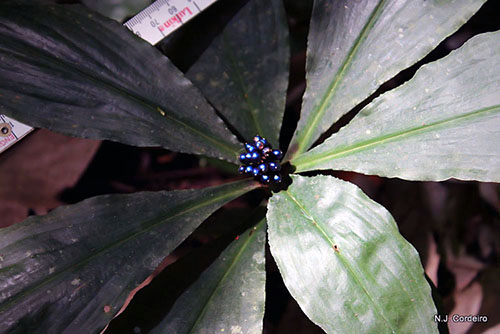