How high can we physically build?

Think of the tallest structure that you hold close and dear to your heart (Go CN Tower GO!). Now think of how high that structure would be if it were to double in height. Now triple in height. Pretty crazy to think of an object that’s extending to the height that commercial planes may be flying at. No, wait, that’s a lie. Planes fly at an average altitude of 30,000 feet, and the tallest building at the time of this post is the Burj Khalifa in Dubai, United Arab Emirates standing at 2723 feet. Do the math, it’s grade school stuff to know that the height of the tower would have to increase by at least 11 times before it would scrape the bottom of the plane. To throw it into retrospective:

The theoretical maximum of the tallest thing we can build is so high, that technically it is infinite. Assuming that the base of this building is strong enough to support the weight of itself (which is why most “tallest” buildings are generally in a triangle type shape), the maximum height we can build before things start to get all nerdy on us is just below the Geostationary orbit of Earth, which is 35,786 kilometers above the Earth’s equator. As soon as we cross that height, we get a new force that we all know a lot about (or should know a lot about assuming you read this blog every day) called Centripetal force. As you extend past the geostationary altitude, a new force on the tower begins to affect it by pulling it up and away from the Earth, reducing or even stopping the additional weight of itself as it gets taller, from being applied at the base.Now, before engineers and architects tackle me from both sides, know that as of this posting date, building something that high is impossible, therefor the whole concept of having a building with infinite height that also has a maximum weight is impossible. Not to mention the building itself would break apart, seeing as how the base of the building attached to the Earth would be spinning and the top of the building wouldn’t.

For no reason other than to include fancy pictures, here’s a picture of the tallest building on Earth (again, as of this blog post date). 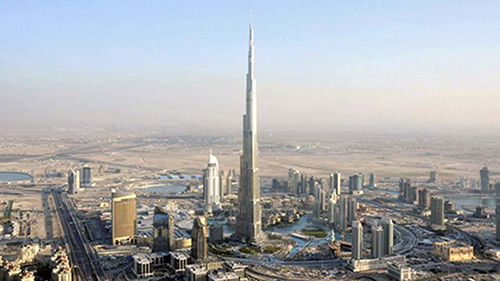