Don’t go get your Earl Grey tea just yet Captain Solo..I’ve mixed the two up on purpose. Why you ask? Because it’s fun to piss off the hardcore uber-nerds that read my blog, who then send me hate mail because I made a minor mistake in continuity. Let’s assume that we all currently live in the Star Trek universe, or Star Wars universe, or some sort of universe where faster than light travel is possible. Some day it might be in our universe, but for the time being, it isn’t, so we will need to rely on imagination.

Just what would happen to someone on a ship, when “Warp Speed” (from here on out I’m combining all genres of faster than light travel into the term warp speed) was enabled? Well, first of all, we need to assume that the inertia of the ship traveling at, and accelerating up to the speed of light could structurally support such a speed. We all know that an object with mass can’t travel at the speed of light, and a space ship is a heavy bit of mass, so we’re forgetting about this key physics factor there and going to assume that a magical alloy of metal was discovered that sustains such speeds and stresses.

OK, now we have a ship made of Jefftanium (BAM!), let’s think about the act of accelerating to warp speed. When you think of Star Trek’s Enterprise, any model, whenever they show an external shot of the ship going to warp speed, you see the engines power up and light from the nacelles grow more intense and then it stretches out as the front of the ship begins going faster than the rear of the ship. Not only does this substantially damage the ship to the point of destruction, but it’s actually quite close to what an object traveling at the speed of light would do, but in the opposite direction. Take a train traveling at close to the speed of light on Earth (hypothetical people!). To someone standing at the station, what would it look like to them? Based on the actual speed, the closer they get to the speed of light, the shorter the train and everything on it would appear. If your eyes could pick up the details, such as a persons face who’s on the train, they would appear thinner, more squished together, depending on how fast the train is traveling.

Space ship, made of magic, breaking the visual laws of light physics, that withstands inertia and breaks Young’s Modulus formula. What about the engines themselves? This is a two part breakdown, first the external view. Star Trek did get one thing right. Engines would pulse more intensely as they powered up, and as the ship reached near the speed of light, it would appear more blue until eventually it would just disappear. Many who think of energy getting more energy is approaching the gamma ray side of the spectrum, so it should appear more red as more energy = stronger wavelength right? Wrong, the engine is moving away from your eyes and the wavelengths are being stretched out, so, blue. One point to Paramount Pictures. Internally now, the engines would need an infinite amount of energy, and while the term infinite when it comes to energy is impossible, we’re going to assume that along with the Jefftanium hull plating, we also have Jeffonium, a source of energy that the engines power off of that doesn’t expire and consistently and evenly provides power to said engines with no exhaust, radiation and no leftover materials as it is consumed. Fantastic huh?

OK, so we’ve now broken down that a ship is near impossible to create and fly by any means; I use the term “near impossible” because we’ve not discovered the entire universe yet, so there could very well be a way to travel faster than light and survive it. Let’s move on to the humans on board this magical ship. What would happen to them?

Well, inertia is a funny thing. An object at rest will remain at rest, we all know that, so even though the momentum of a ship traveling forwards in a zero-gravity environment, anything standing on the bridge of this ship is considered at rest, relative to the ship. If the ship accelerates, and you don’t brace yourself, you’ll fall backwards. This is the same concept of when you accelerate in a moving car, and you’re thrown back in your seat further. If a ship were to accelerate to the speed of light, the force pushing against a human body is roughly calculated to your body weight multiplied times the speed of light, multiplied further by the mass of the ship (relativity!).

but wait, Jeff, Enterprise and other ships had “Inertial Dampeners”

OK, through the magic of this blog, inertia isn’t a factor we’re calculating and learning about here – EVEN THOUGH it’s a MASSIVE part of physics, humans now can survive the acceleration to c (that’s the letter short form for the speed of light in a vacuum). To any person with normal healthy vision, what would it look like? So far all TV shows and movies would have you believe that the stars you see as dots in space would for some reason stretch out into lines (similar to the way the ship stretches), and then you’d see lines infinitely long, as you traveled at the speed of light. What would actually happen is in hot debate, but winning that argument is that we would blue shift out everything until all we see is white, in black tunnel vision. Think of a a perfect square of paper. At the exact atomic center of that piece of paper is an atom that is pure white in colour. As you gradually get to the edges, each atom grows darker until the final row of atoms at the very edge is pure black, like a black hole (but not a singularity). That’s what your eyes would see, eventually that is, as before that happens everything would slowly grow bluer and bluer until it reached the ultraviolet band.

Bring a pair of sunglasses.

(Editorial note: Since our eyes are not perfectly round, the concept of a perfect square of paper as mentioned above is technically inaccurate. It would appear more darker on the sides of this paper, when compared to the top. It was easier to explain with the perfect square however, see below) 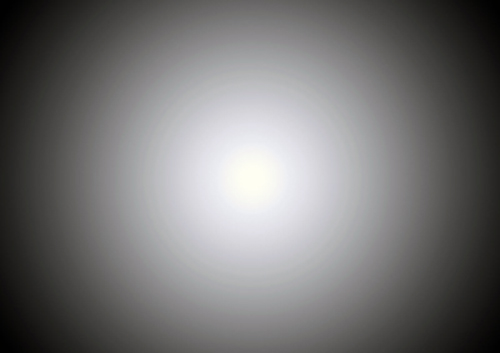