The day the Earth stood still

So, last night I received a phone call from a friend, she had claimed it was “EMERGENCY, CALL ME NOW!!”, so like the panicked person I am, I stopped everything and called thinking she had been shot or in a car accident or something. No.. it was a science emergency. Equally important in this day and age, but we exchanged a few words about the proper use of “emergency” via text message. Her question was about the Big Bang Theory (the event, not the excellent TV show), which I’ll write up a post a few days from now. Her friend was under the assumption that the big bang itself had not happened yet, and that it was going to be the cataclysmic event coming soon, in which the entire universe will collapse in on itself, then explode outwards destroying all life across the universe.

After the face-palm sound heard around the world made by me, I explained to my friend what to tell her, but that left me uneasy. Uneasy in the idea that people know so little about science, physics and astronomy that they actually believe that will happen? That the big bang has not happened yet? I find that to teach people about science, and trick them into learning without them knowing they’re learning, is to give them a scenario that can only be found in the movies so they think it’s cool, and then slip in the educational material.

Infrequently asked of me is to explain what will happen to the Earth in x years, x being a numeric variable that changes (your grade 8 teacher didn’t lie when s/he said you’ll need to know this later on in life!). Gauging the situation and the person asking, if they’re the type of person who wants one sentence answers or the full thesis paper explanation, I’ll either give them the “The sun will explode, engulfing Earth and a few other planets”, or I’ll tell them how we’ll eventually stop spinning and will permanently face the Sun at all times, extending what one day today, will last one year then. Think of it, 6 months of constant daylight, and 6 months of perpetual darkness. That is assuming that for some reason,  the sun doesn’t blow itself up.

So, what would happen if the Earth suddenly stopped spinning – like, stopped on a dime and in less than a second we were no longer rotating on our axis? Well, first, we’d have a tidal wave about 2 kilometers high, traveling at about 30,000km/h, that would take out anyone along the western coastline of any land mass of Earth in about 8 seconds. It would travel a few hundred kilometers inland, and any standing structure would be taken out. OK, so goodbye Vancouver, California, Peru, London, and Morocco (and everyone else.. I’m not listing all geographical locations on the west coast of every land mass). What about Ohio, Saskatchewan, Germany, Egypt and Brazil? Well, assuming the water didn’t hit them, any rivers running through them would begin to travel north or south, based on where they are located in relation to the equator. All the water on Earth would begin to pool and collect there, and any ice that’s currently there would freeze along with it. 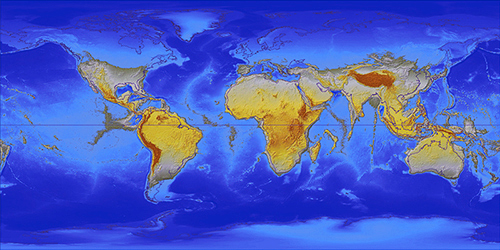 Say good bye to Mount Everest near Nepal being the worlds highest point. By about an additional 2000m, the Chimborazo volcano in Ecuador would now be the tallest land mass, followed by Mount Kilimanjaro in Tanzania with a height of just over 300 additional meters than what the peak of Mount Everest is measured at today. Mount Everest itself would then be getting the bronze medal in this race for the highest peak.

This is because the point at which “Sea Level” is currently measured at would now be lower due to the water levels receding so far away. The average height in sea level would now drop roughly 8km globally. The Marinaras Trench, the lowest point on the surface of the Earth, would remain the same depth, and would still be near impossible to reach the bottom. I say “Near Impossible” because it is possible now, but difficult and ridiculously dangerous, so lets let James Cameron to go there again; chances are he was just trying to go to the grocery store, and iOS 6 maps took him there..