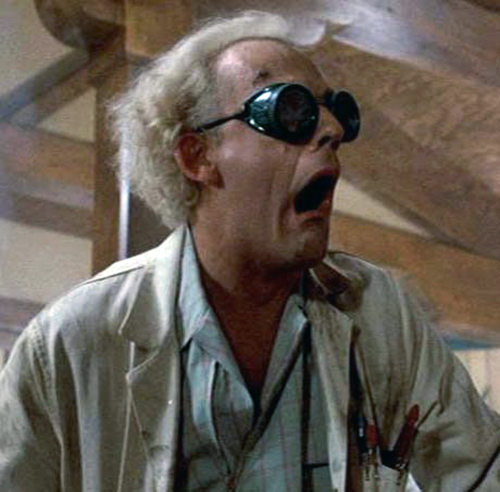 Before I begin, know that things are going to get technical, but like all my other posts, I’ll do my best to explain it in a way that anyone can understand..

So, what do YOU think Time Travel is? Do you think it’s reading a binary code off of Fry’s butt cheek to open a portal? Do you think it’s having a Delorian and reaching 88 miles per hour (141km/h)? Is it reading pages from an old diary to switch your current consciousness with your younger self? (+5 internets if you understand where that last pop culture reference came from)

Regardless of your answer, you’re wrong. Time travel can not exist in a form of any sort of portal, whether created instantly as you pass through it (Back to the Future) then instantly closing, or whether a portal is created for a fixed amount of time (Futurama). The reason behind this is the same reason why holding your walkie talkie radio transmit button down then holding it near a speaker causes feedback. Time is traveling forward, it IS moving, and if you were to go back in time, you are now different in the already pre-existing time flow, so a new flow is created. This flow interferes with what has already happened, called the grandfather effect. Grandfather effect is the age old tale of “what if I killed my grandfather, would I then not exist the second he died?”.

No, you would still exist. Einstein and Hawking both agree on the subject that assuming time travel could happen, where you ended up would be a parallel universe to the one you came from, one that was ready for you to show up at that specific time. Any changes you make there, including killing a distant relative, would mean that future, in that time line wouldn’t exist, but you still would, since you came from somewhere else.

It does! but not in the way you perceive as time travel. You can’t travel BACK in time, but you CAN travel FORWARD in time! It’s easy to do too! Just find a massive black hole in space, acquire a space ship that can orbit it safely, with an engine that can go faster than the speed of light. How much faster, we won’t know until you get to the black hole, so you may die regardless of the FTL engine.. but good luck! Why does this matter? First we need to know what a black hole is, what the Schwarzschild Radius is, and lastly, what light is.

Let’s start with Light – it’s easy, it’s all around us. Light is a particle called a photon, and a photon has no weight to it. Yes, Star Trek’s “Photon Torpedoes” are a fancy way of saying a torpedo made of light, so the massive damage they did is completely false. Sorry Star Trek fanboys. Light travels at 299,876 meters per second, and a black hole has such a massive gravitational pull on everything around it, it can pull those photons into itself and suck them in. What happens inside a black hole we don’t know. The “point of no return”, also known as the Schwarzschild Radius is the point in which if anything crosses that barrier, it will not have enough energy to return. If Light crosses that radius, it will get sucked in. If YOU crossed that radius, well, your story will never be told. Every object has a different radius, the larger the object, the larger the radius.

So how does knowing all of this matter to time travel?

Take that magical space ship you suddenly own, and fly to the closest black hole to Earth, V4641 Sagittarii in the constellation you know as Sagittarius. It’s about 224,396,806,050,000,000 KM away from us right now. Traveling at the speed of light, it would take you about 748,298,650,275 years to get there.. not feasible, so you’ll need to travel millions of times faster than the speed of light to get there. Well it just so happens that the space ship you’re on travels at 748,298,650,275 in one second with no ill effects to it’s cargo or crew; and it runs on Windows, because Mac charges you to go faster than 1 times the speed of light..

Figure out where the Schwarzschild radius of this black hole is by throwing an object out the window, that has the same mass as your ship (it was in your cargo bay.. didn’t you look?) to see if it floats there or gets sucked into oblivion. Once you have that info, orbit this black hole 5 times, and then return to Earth. If you can figure out the radius of the Schwarzschild radius, you know how long it would take you to complete one full orbit going 1 times the speed of light. Figure that out in Earth years, and you can then figure out how many years ahead Earth will be when you return.

Math.. I hate Math.. which mean’s I hate you Jeff!

Settle down, it’s easy math this time.. Let’s say that it takes you 10 Earth years to orbit once around the black hole, exactly on the Schwarzfield radius. Once you’ve completed your 5 orbits, on Earth, 500 years will pass, but only 50 Earth years for you will have passed. Why is this? Einstein’s theory of special relativity states that if Light were to speed up or slow down, time itself would also speed up or slow down to adjust for the differences. Time can not exist in the current form that it does, if light had a finite speed, therefor it must adjust itself to keep time going, or else bad things would happen. For people on Earth, the speed of light has not changed, but for you, the speed of light is being slowed down to a point where you can still see everything that has not crossed into the death radius of the black hole.

Think of it this way: If you’re traveling on a train, and that train is going exactly 1 inch per second UNDER the speed of light, what would happen if you got up and ran towards the front of the train? Obviously you’re running faster than 1 inch per second, therefor you’ve just broken the speed of light. What actually happens in this hypothetical situation is that light would slow down, and our idea of what an inch is, would actually be much larger than what it is in our current form. The maximum speed of light is set, and nothing can exceed that speed. Anything that tries, will be slowed down. If something is slowed down, that object is slowed down, but not everything else.

You’ve just traveled through time, get back to Earth and see if we’re still killing each other instead of banging hot green space chicks..